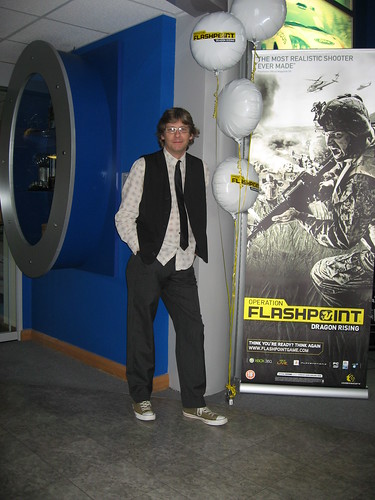 A new shotgun interview was found by Helios our so beloved community manager today to which:

“A few weeks back I went to see Operation Flashpoint: Dragon Rising at Codemasters HQ. While I was there I had a chat with executive producer Sion Lenton, who had quite a lot to say about Codemasters’ take new on the military shooter. What follows is my transcript of that conversation, in which Lenton talks about the balance of realism in the game, the “documentary” feel, the horror of war, and responsibility of making a serious war game accessible to the majority of gamers.”

Found by new member JHalpert, we now have new footage of Sion doing a interview across a tv monitor. It is 6:04 min long – It opens with rehammering “We are aiming for realism”. Sion mentions it that OFP1 was a “Hardcore military sim” and that they tried to make it similar, but they also note they have made it “Accessible”.

There is a worrying tone of “we attempted realism” suggesting that not archived but nerfed for console usage. Sion goes over the same information we know but hints on the gameplay feel. Sion speaks of LUA and modding lightly from a long term gaming perspective, but nothing more other then CM noting it’s interest in it.

Sion also notes of a Fall 09 release date.  (This used to say Q4 09) I miss heard the British accent to say four oh nine. Majority vote has concluded it was a error and was Fall 09. Sorry for that

It is solid HD footage, however like the other videos you can see some bugs in it. It’s very similar to the other stock E3 Footage seen today (as thats most likely what is playing in the background).

The most important release of information however is that they have finally confirmed current alpha status in video media. With the game feature complete the coming months will be OFP:DR’s devs multiplying the world objects and features from the current single object already made. The game from this point should expand rapidly.

We all have free time and we are all avoiding work, so why not put this extra time to good use and destroy the public image of your favourite OFP2 developer.

Codemasters is allways up for a good laugh and we as a community are always ready to provide.

So fire up Photoshop, Gimp, Paintshop or MS paint and have at her!