Just in from Helios is the announcement that the Demo is going to be “delayed”. Now only PC users post release will get a demo. It was noted this was done to improve quality of there final demo presentation.

Whilst we had originally planned to release a demo prior to launch, these plans have now had to be changed. The demo plans now are that we will now be releasing a single player and co-op demo on PC only post launch of the full game.

The main factor in this decision is to ensure that the full game gets 100% focus and attention before it’s released. We know how long many of you have waited for this game, and we want it to be as polished as it can possibly be for your enjoyment, and this is why the demo has had to be pushed back.

Flanking the new video is a preview of the MP of OFP:DR. At a quick glance at the preview reads alot of CM’s marketing so use your judgment when reading, it seem alot of “hype”.

Just posted up now, and after reading the article it appears to be based on the console versions, though of course it is entirely possible to play 4v4 with AI teammates on the PC as well

http://us.gamespot.com/xbox360/actio…&mode=previews
“Operation Flashpoint: Dragon Rising is about as far from run-and-gun action as you can imagine, and that slower pace will require a measure of patience on behalf of the player who will need to front-load lots of planning into a level before the bullets start flying. Those with a head for strategy, heads up: Dragon Rising is set for deployment on October 6.”

This video is 1:19 long and shows off MP skirmishing. The video is simple, however it shows a quick look Helicopter combat, draw distance, terrain quality, tank combat and urban fighting.

Please be aware that the member in question hasn’t played the game but is basing he’s preview on video’s as well as other information currently available to us. Still, it’s very nicely written and may have some information previously unknown to you so enjoy.

That Dragon Looks Awfully Like an Attack Chopper!A Preview of OFDR for Consoles by Community Member ‘tanky’

(please be aware that some of this will be info which other previews have access to but I fear that mine will be better written with less of the BS…it’ll certainly be no worse than what we’ve been reading!!)
END_OF_DOCUMENT_TOKEN_TO_BE_REPLACED

END_OF_DOCUMENT_TOKEN_TO_BE_REPLACED

A new Czech Preview was found by PanVlk47 and the previewer talks about the game being not as hardcore etc… as the community was led to believe.

An excellent preview and a must watch, the sound becomes fuzzy after 7 minuites but the full transcript is available on all of the other pages once it does do this.

Stuff.co.nz has released an OFP:DR Preview, it can be read here.

In the preview, the journalists play the radar mission one that is already played by an high amount of game journalists.

According to the previewers, Nature is the true star in Operation Flashpoint: Dragon Rising. The sounds sounds very realistic and convincing, and, even while the version their played is still a beta, the sounds already sound like it’s a final version of the game.

The article closes down with:

“A Gears of War or Killzone clone it is not. For PC owners, the real question here will be whether the numerous fans of the original can be convinced to put down ArmA 2 and sacrifice a bit of realism for something a little less intense.”

The article is located here.

Thanks to community member 1Mystic-G A new, spanish preview was found. The translation can be found here. 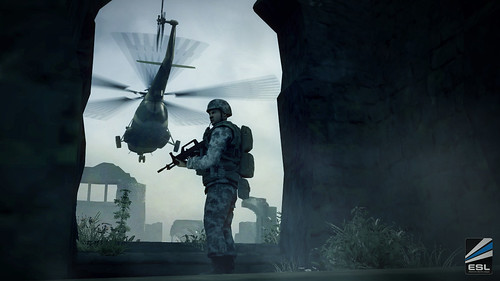 A new preview has been found on One up.

Most military-themed games are either roller-coaster shooters (the Call of Duty franchise) or shooters with tactical elements (Rainbow Six); the original Operation Flashpoint fitted neither of those distinctions, as it was more of an “infantry in war” simulator. That is, instead of filling your screen with spectacle and flourish while leading you down a very deliberately-designed experience, Operation Flashpoint just placed you in the world with yourself, some gear, a mission objective, a detailed array of systems (movement, weapons, A.I., etc.) to consider, and the freedom to figure out how to fulfill your missions with your toolset. It was simultaneously hardcore, tense, unforgiving, and exhilarating at times. So while the original developers have moved on to the ArmA franchise, Codemasters is trying to recapture some of OF’s intense infantry-simulation magic with Operation Flashpoint 2: Dragon Rising.

Thanks to heroes member ubermachtig, a new dutch preview was found. The pages have been translated for you:

Here you go another preview. Still haven’t had the time to read this one before sending it out – so no review still from me. As noted before heard this is a really detailed and important preview to read. The thread didn’t get to many hits though.