Released today is information regarding a new German Community Manager as well as a fresh new exclusive screen for the German Fansite – http://operationflashpoint2.info 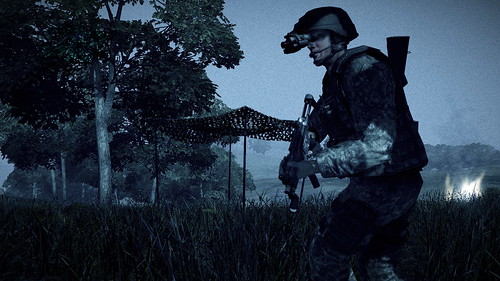 The new community manager is a guy named Murkor. He speaks decent English and is a friendly person. Please welcome him, if you see him around.

Here is his message to the German fans in English:

as announced last week, Codemasters has hired a new contact for the German “Operation Flashpoint: Dragon Rising” community – me.

I live in Hamburg, not far from the German Codemasters headquarters and I’ve been working for the video-game industry for some time now. Since I’m an enthusiastic tactical-fps-player myself, I was thrilled when Codemasters asked me, if I was interested in participating in the community support for “Operation Flashpoint: Dragon Rising” and I accepted gladly – in fact I had seen the presentation of the game by Clive Lindrop on the Games Convention 2008 and had been longing for the game ever since.

Last week I finally got the chance to visit the beautiful(!) island of Skira myself to meet the A.I. (in this game A.I. actually stands for Able Infantry and not for Absolutely Incompetent) and let them chase me through the virtual vetches. Now I’m totally convinced, that there is something fantastic coming our way! For example, there was no way I could persuade my fellow squad members to sacrifice themselves as cannon fodder (only for testing purposes, of course) and it seemed that nobody had told the opposing forces, that they are “only” characters in a video-game. Any attempt to rush over the island – even on easy difficulty – resulted in the sudden death my character: To survive on the island of Skira, one must scout the surroundings carefully and advance with extreme precaution. Unfortunately there was neither time nor the adequate ambiance in the office of Codemasters at that time, to play this game as it should be played.

So, like you guys, I am damned to count the hours until the demo is released. I hope, from now on, I will be able to give you the latest news and facts about “Operation Flashpoint: Dragon Rising” and I’m really looking forward to exciting battles on the island of Skira.

I look forward to working with him and perhaps together we can reach other further to the German side of the community.

RSS feed for comments on this post. TrackBack URL