New magazine scan’s have been found by community member Shaz73. There was, unfortunately, no source included. The magazine praises OFP: Dragon Rising for it’s unforgiving realism. The Article also came with a good, fitting quote:

The scan’s can be found on the official Codemasters Forum 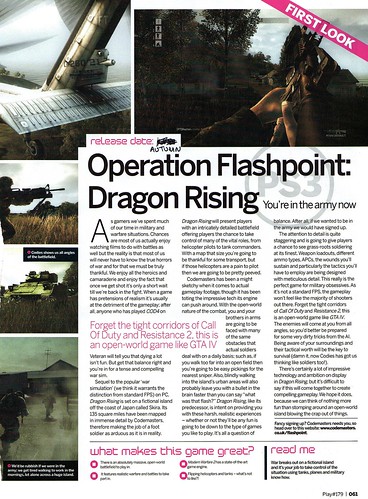 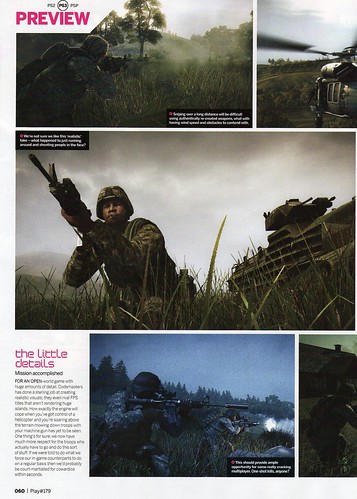 The discussion of these new scans can be found here.

(On page 2 the release date was altered to Autumn since the page said June which it isn’t.)

Today we where informed by Helios about a new important article from PC Zone UK. The article has been released in shops in the UK. We are currently waiting on a Hero to acquire a copy of the recently published July issue PC Zone UK. From first responses this article seems that it may be one of the most important of the previews so far. We will keep you updated of any major developments. If scans are found they will be uploaded to the community areas (Flickr, ScribD) and you will receive a email shortly there after.

Posted moments ago by Shaz73, “Phone Camera” pictures of the PCZone 4 page article. As a added bonus a Xbox Mag was also photographed. They are viewable here. When better versions come around they will be added to ScribD and Flickr, the quality is too low for these to be them be any use as the archived copy.

** UPDATE **
We have now received master scanned copies thanks to Hero tot brill. They have been uploaded page by page to Flickr. As well the ScribD PDF version is viewable below.

END_OF_DOCUMENT_TOKEN_TO_BE_REPLACED

Due to the efforts of a community Hero, I have obtained and made available to you the scans of the the OFP2 preview in the Official PS Magazine.