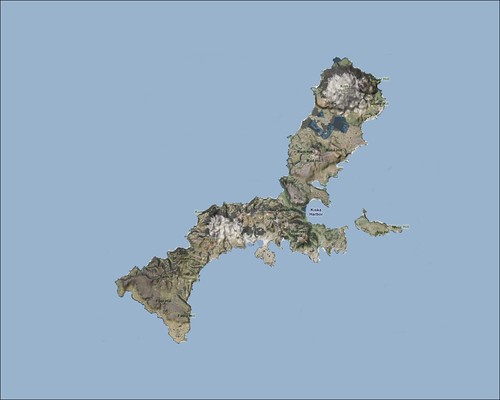 Helios notes that there will be another batch released on Wednesday and Thursday of this week.

Am glad to report that I’ve now received back answers from the recent “Creating Skira Island” Q&A session and you’ll find the first batch below. The team couldn’t answer every single question asked, but as you can see below the answers they did give were quite in depth and very informative.

I’ll be releasing the answers in 3 batches, with the first batch posted below and the next 2 batches coming on Wednesday and Thursday:

To create the huge environment that is “Skira Island”, our art teams essentially used a combination of 3D Studio Max, Adobe Photoshop and multiple home-built custom tools. Once the assets themselves were created, proprietary conditioning pipelines prepared the data for the game engine to use and display on-screen.

2 – 1Mystic-G – Are there any other environment sounds you had to capture besides trees and water? If so what are they?

Our environment sounds are completely tailored to the Sakhalin setting; we used the expertise of recordist Chris Watson whose work can be heard in many BBC TV and Radio programs as well as Major films. Chris has captured wildlife and ambience recordings from the actual island chain, as getting the ambience sounding as real as possible is hugely important for us. If you decide it’s time for some recon we want you to have interesting things to listen to after all.

As for specifics we have wind through long grass, through gaps in rocks – our ambiences are also tailored for the day and night cycle so you have a different feel when it’s dark. One of our favorite recordings is the arctic fox as it’s a very haunting sound when heard at a distance!

One interesting thing we have been doing is letting the battle rage on in-game whilst we record only the distant battle sounds and from those recordings make “battle ambiences” that sit perfectly in the game world adding another layer of intensity.

The ambience like every other area of the sound design is focused on detail and realism and as much use of “the real thing” as possible.

3 – ZaRiF215So – How Many People Did you Send to Kiska To Look At The Geography of the island and The Like.
We sent a dedicated photography team to capture every aspect of environmental detail, capturing everything from pictures of dirt, the patterns of individual leafs of grass and trees, up to panoramas that capture the expanse of terrain and eco-types. It was important for us to mirror the different types of terrain that appear in different areas, and to match that terrain to the vegetation. We needed detailed documentation to answer every aspect of the environment; on what do the beaches look like, the forests, the mountain tops, etc.

4 – wassisname – The island is 220sqkm but how high is the ceiling What is the over all world size floor to ceiling wall to wall?

This one actually took some digging to find the answer to. At the moment, we found the highest point on our island which was the tip of our huge volcano, and then added more than a kilometre to it. This means that the literal “game space”, extending to the limit of the oceans around the island itself and the sky measures to: 32km x 16km x 1.76km.

5 -Mr.X3CuTa! – Which part of creating the island did the team have most fun with? (in-depth details please)

Several team member’s favourite area of the island is an old abandoned monastery that was shelled at the end of WWII. It’s visually beautiful, strategically key to holding the island, and a total blast for multiplayer PvP missions!

RSS feed for comments on this post. TrackBack URL