Found by danthom a few moments ago is a change by CM to the forums. They have now added a “Picture Album Tab“. I presume this is the work of Satine as she already has a flickr account, and seems to be a person that likes to bridge the gap of Corporation and Community – as noted also by the blog. I don’t know if it’s her or her job. Regardless, Two of the new pictures found are relevant to us.

First found is a Picture of 1st1 – French Community Manager for OFP2 (or at least was, don’t know if still is). 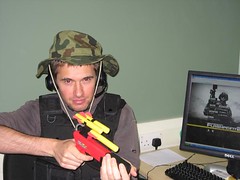 Second is of Sun God Helios working hard – or at the very least staring intensely at a screen. This is how he get’s the big bucks. Look stressed and make it look like your going all out. For all I know he might be reading the fourms or dealing with one of my (Sir. Polaris) ‘Kind IM conversations’. Both is enough to give some one a early retirement. 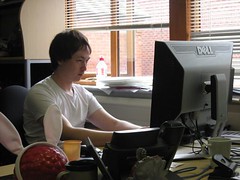 Show your support to Helios!
That being noted I am sending out a general call for fans of OFP2 to share some love for Helios by filling his photo with random comments and or spam – What ever you do best. Show your love by making him the be dev in the office with the biggest fanbase. It’s the least we can do for all the dedication he gives us.

Make it happen Community Heroes! Post a comment on Helios’ Page. Lets push it to 20 at least.

A new preview and screens

Just getting this one out before going to bed (11:50PM EST). There is 2 good screens and a few shots of Tim Browne playing OFP2 on what looks like a DELL XPS. Which is good news for PC gamers as the XPS is aged tech nowadays. 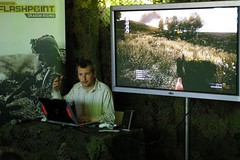 A new A.I. command has just been revealed by Helios, this new command is the ability to assault a building. At the minuite we only know that it is assault a building but it is likely to have multiple options. (Much like that of the artillery firing ability of barrage etc…)

The game has an “assault building” command that instructs your fireteam to enter and secure a building.

Posted a few hours ago (5am EST). Helios has announced information from Tim Browne (Lead Designer on OFP: DR) regarding a a list of 5 achievement/trophy names that you’ll be able to attain in OFP: DR. They are:

As these are only the titles to the achievement. A competition has been created around what you need to do for each particular achievement/trophy.

If you have any guess to what the above are, head over to the source link and make a post. First person to guess a any of the titles correctly, gets a custom avatar. Thats makes five that are going out soon, so don’t delay.

Heres some source code to help you make a clean post.

After 1500 lines and 80kb of “Deny from”’s later. I have stopped the Turkish Telecom provider Turk Telekom and it’s league of spam riddled clients. As such anyone from Turkey and more so Turkish Telecom provider Turk Telekom will no longer be able to view this website. As well any major known spam ring has been banned as well, as it is possible my host has failed to ban them.

There might be a little bit more lag then normal as a 80kb file is checked every time a page is loaded. However now we can sleep knowing the spammers (or at least this bunch are dead). I would like to Thank Fin for helping out on IRC and the Heroes group and Hi3rling for moral support.

We are still incurring loss to our bandwith, I have opened communciation with my providers to perhaps get them stopped at a server level.

Due to a security leak this website has had it’s bandwidth burned by Turkish Spammers. There is a good chance the website will go offline in the next 2 days. If this happens it may be till the 20th or the 31st until it flips over. I am currently in communications with my webhosting to see if somthing can be done about this issue, without incurring a large unneeded cost.

This downtime will not affect any of the off site groups, flickr, or the toolbar. The data on this website will remain, access will be restricted and the site will display a “bandwidth exceeded” message.

I am working to correct this issue with my limited webskills. I have identified the problem as the Fansite Topsite listing with all 2.2 gigs of dammage done from middle yesterday to this morning.

A new page has been added to collect all infomation regarding the release of OFP:DR. Information regarding the release date of Operation Flashpoint: Dragon Rising, On Xbox, PS3 and PC – where to buy, deals and promos and first release infomation will be collected here. View page Operation Flashpoint: Dragon Rising – Release Date

Make sure to bookmark. You can currently count down the days to Operation Flashpoint: DR’s release.

Released at 9pm EST. Take a sneak peek at the arsenal that will be at your disposal in Dragon Rising.

I guess this means a low turnout for the party

, I’ll still be there incase Helios brings us goodies. The current noted release date on Game Trailers is September 30, 2009, while the video is OCT 06 we will confirm with Helios tomorrow. 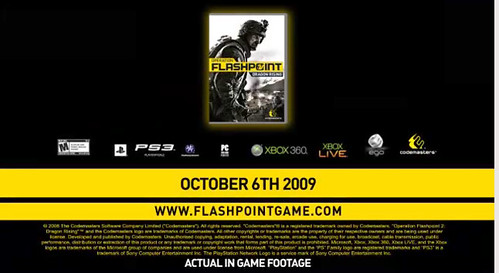 As promised, today we are pleased to announce that Operation Flashpoint: Dragon Rising will be shipping on October 6th in North America and releasing on October 8th through EPAC territories with a October 9th street date in the UK.

To celebrate the announcement of the release date, we are releasing a new “Armoury” video (which most of you have seen!

The video is now available to view and download from www.flashpointgame.com

Finally to round things off we have also released a brand new set of screenshots from the PC version, again showing off some of the weaponry you’ll be able to get your hands on in the game. 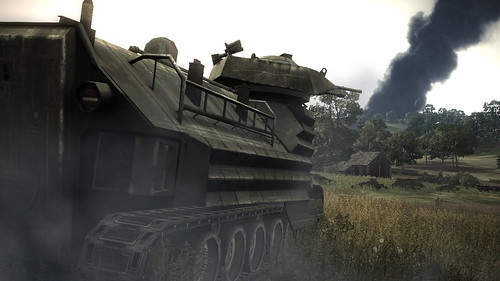 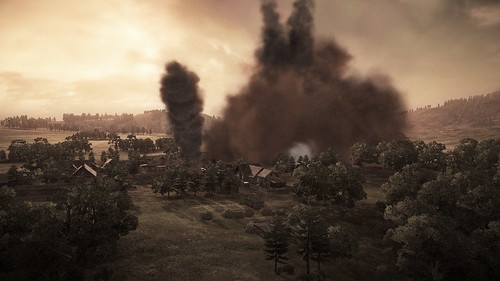 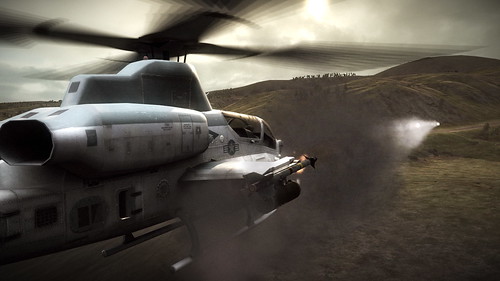 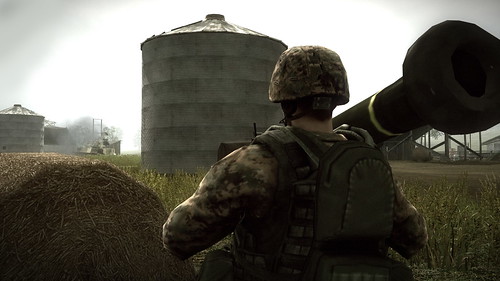 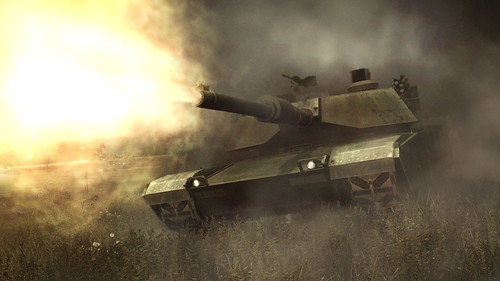 Posted moments ago by Helios was a link to a Intel sponsored interview with a flash tech simulator. This simulator shows you how Particle emitters work in games, and allows you to make your own explosion. It is really quite the fun and has a good level of depth.

http://OperationFlashpoint2.org is looking to see your submissions, please post in the comments in this news post your creations – we want to see them!

In this exclusive interview with Intel Game On, Codemasters’ Andrew Dennison, Rendering Group Lead on Operation Flashpoint: Dragon Rising explains why, if you want realism, you don’t just need a capable graphics card, you need a powerful CPU.

The Geekout notes a second interview. The next interview will be in regards to the very important AI path finding code.

The questions have been reposted for archival purposes below.

END_OF_DOCUMENT_TOKEN_TO_BE_REPLACED

As with all releases there will be a IRC party where we will shoot the breeze, talk and get to know each other and perhaps get in a few rounds of OFP1, while we wait on the new information. Everyone works together and like the last few releases – we get the information first, even before the forums have a post. So make sure to show up and meet some people while you wait for information. Sure beats hitting F5 by your self.

This Friday the release date for OFP:DR will be given. We want you to come count down with conversation and mass refreshing as we wait for the world wide release of the date of this highly anticipated game. We are hoping to break the channel record of 87 fans in the room at a single time. So invite everyone you know!

Everyone hopes to see you there. Please don’t be shy! Come chat or at the very least sit and watch and help break the record.

About IRC:
IRC is short for Internet relay chat. IRC is effectively the grandfather of modern chatrooms and instant messaging clients. Operation Flashpoint 2 operates a channel in which members speak in real time with each other. This link above will connect you there. Please note allot of members idle. Communication may not be instant when you first join, please speak and wait for others to talk. Please ensure you are respectful of others. The Channel #OFP2 has many members that are there every day of the week at different times, try rejoining at different times to meet new people.